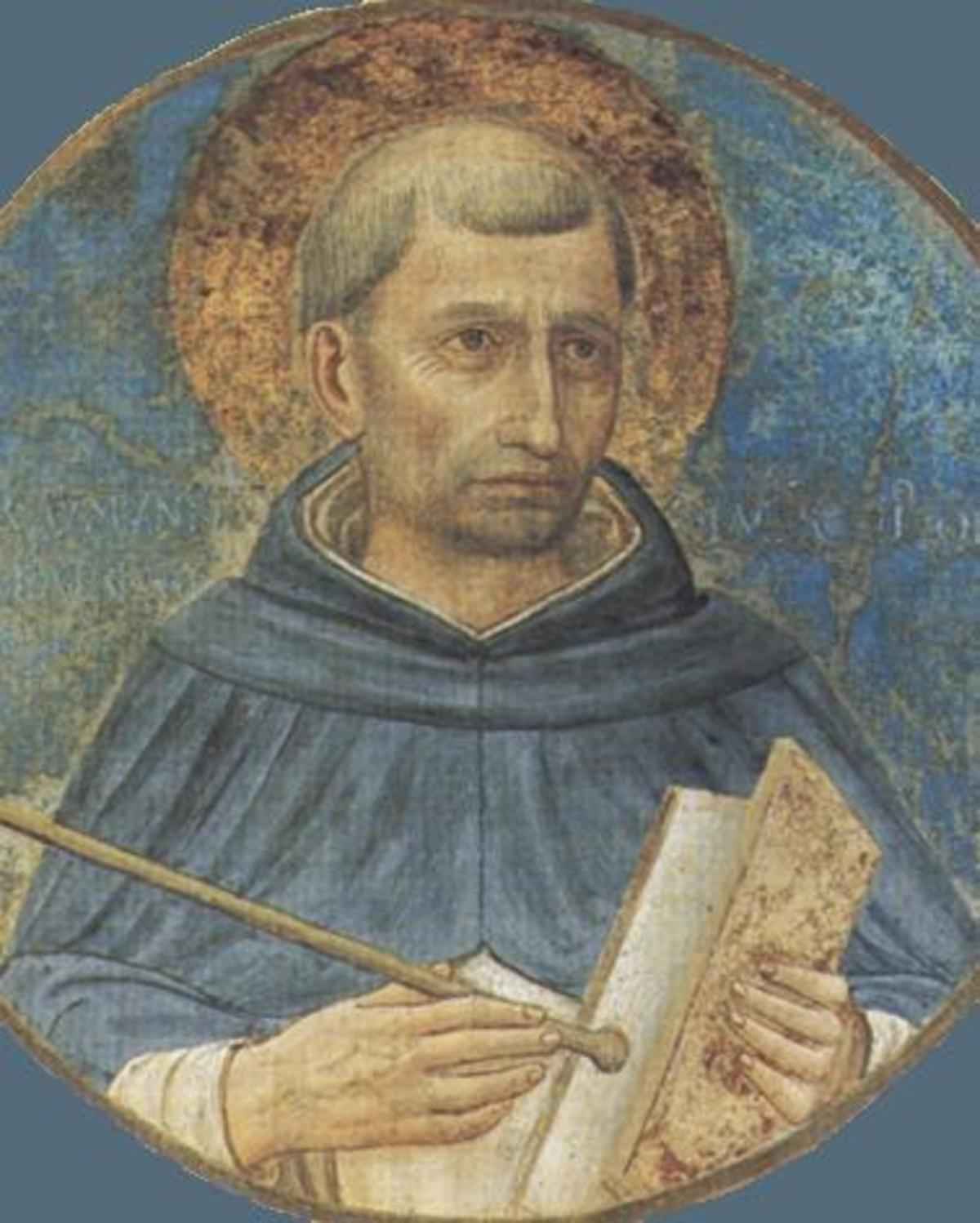 Holiness at the Heart of Our Studies 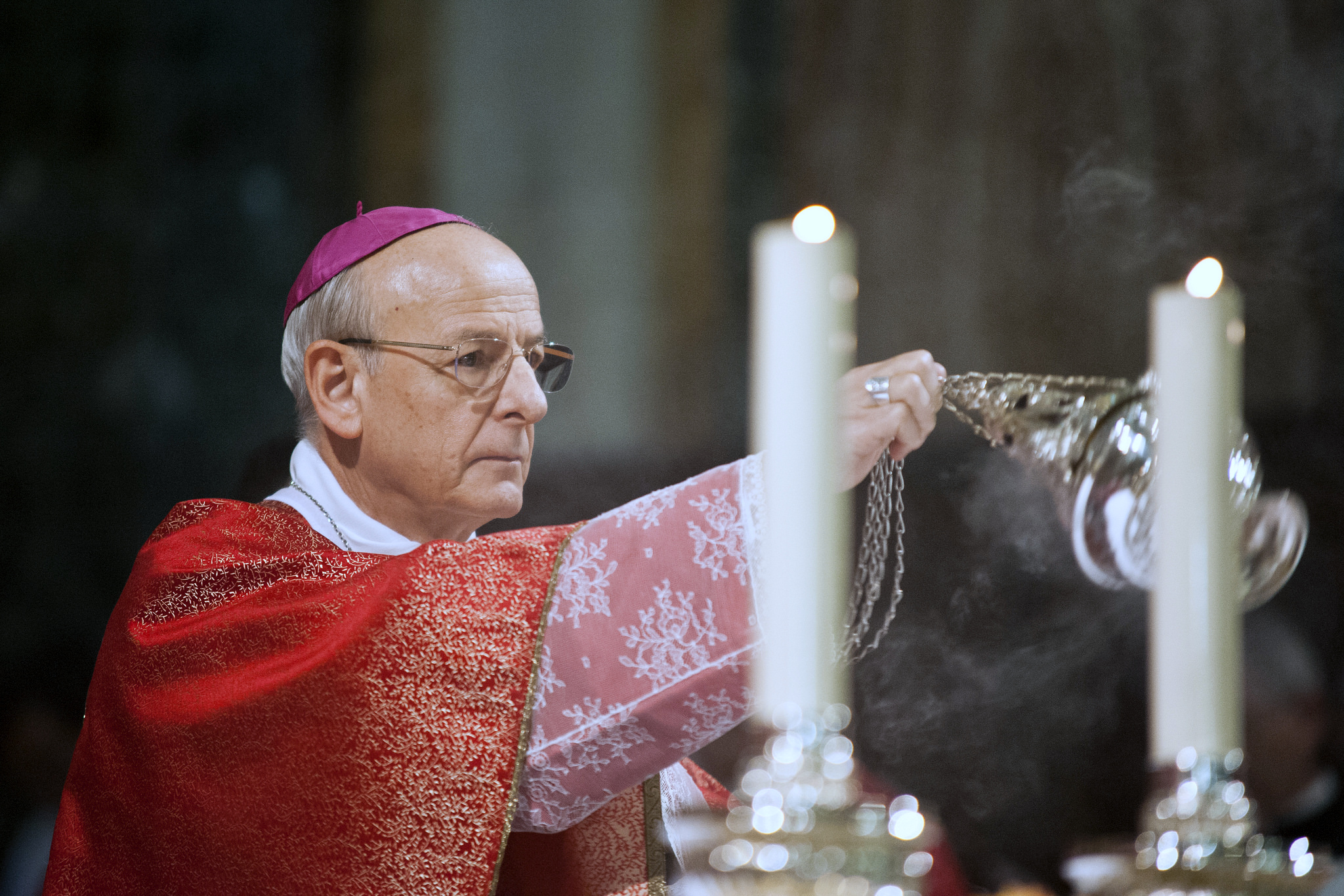 October 8, 2018 officially marked the beginning of a new academic year at the Pontifical University of the Holy Cross. Hundreds of students and professors gathered in the adjoining Basilica of Sant’Apollinare to commemorate the occasion with a Mass celebrated by the Prelate of Opus Dei and Grand Chancellor of the university, Monsignor Fernando Ocáriz, which  was followed by an inaugural lecture on “The Christian Ideal and Commitment in the World: Three Lay Persons of the 16th Century”, given by Mr. Luis Martínez Ferrer, Professor of Church History. Each academic year begins with a Mass of the Holy Spirit, in which all those involved in the life of the university are invited to ask the Holy Spirit for the grace to, in the words of Msgr. Ocáriz, “become docile instruments of His action in the Church and in the world”, so as to be led “to the truth in its entirety”, both intellectually and spiritually.

While Santa Croce is primarily an institution of higher learning, it takes great care to ensure that its students receive human and spiritual formation, as well. The universal call to holiness in the everyday circumstances of life lies at the very heart of the university’s mission, and it is with this perspective that all students – whether clergy, religious or lay – are invited to approach their studies.

The Program of Church Management

The Markets, Culture, and Ethics Research Centre (MCE) of the Pontifical University of the Holy Cross is equipping Church leaders with management skills to carry out the Church mission. MCE is offering a year-long pro­gram of study in Church manage­ment to provide leaders with the secular skills needed to implement Catholic social teaching.

Since February 5th, a class of nearly 40 students comprised of priests, laity, and consecrated reli­gious members have been attend­ing courses in a variety of disci­plines including economics and finance to gain skills directly ap­plicable to their leadership roles in the Church.

Please take a moment and read our special report, highlighting the academic year 2017-2018 at Santa Croce. 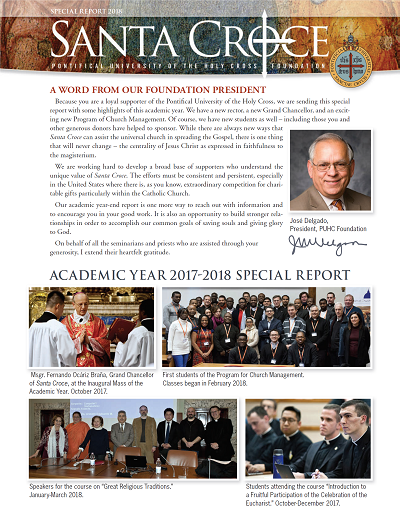 The School of Canon Law 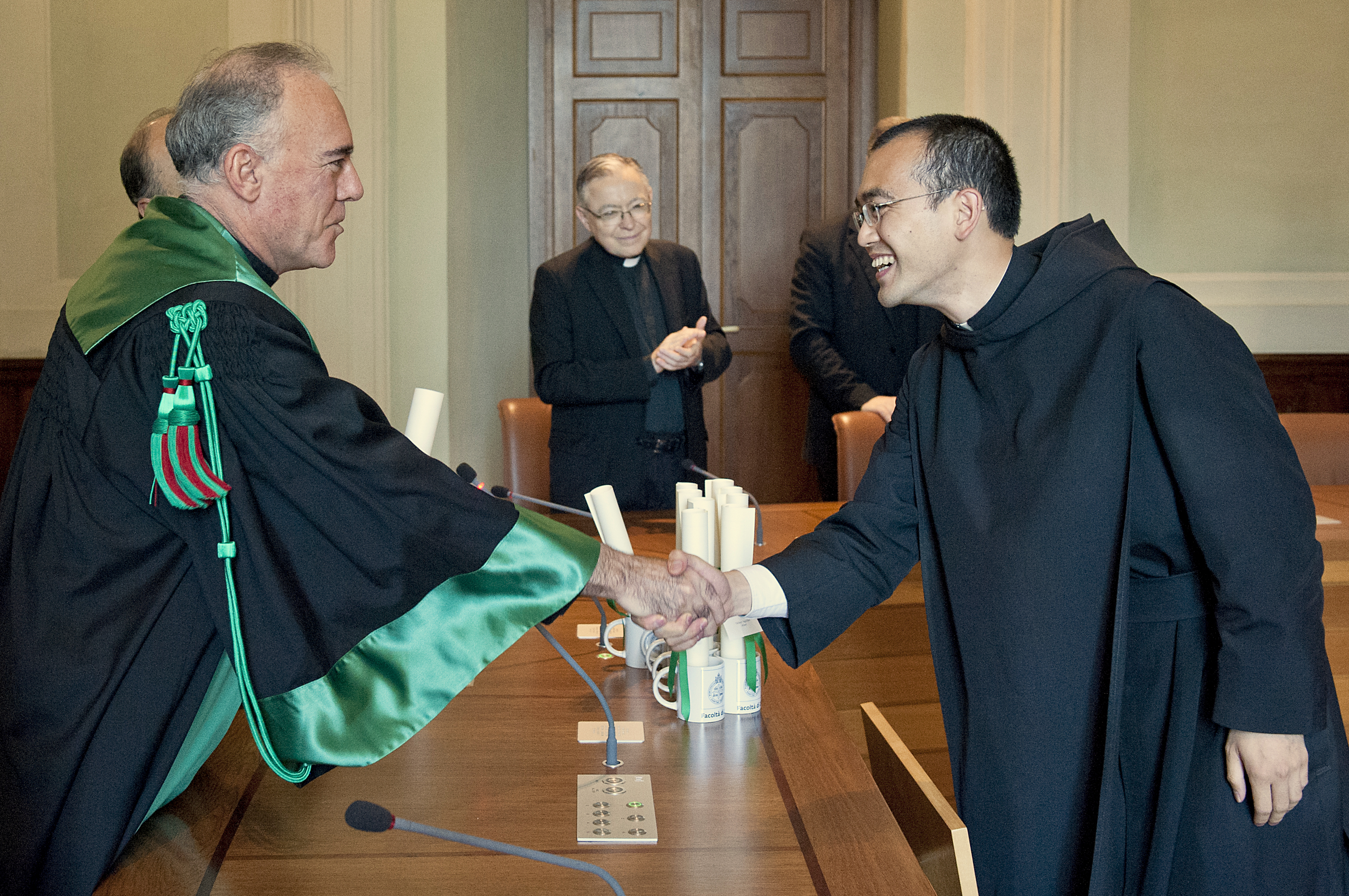 Fr. Jesús Miñambres, Dean of Santa Croce’s Faculty of Canon Law, presents a diploma to Fr. Anthony Nguyen, a Benedictine priest whose monastery, Westminster Abbey in Mission, BC, Canada, runs the seminary for the archdiocese of Vancouver. He is currently teaching canon law in the seminary of Christ the King in addition to his involvement in monastic formation.

The School of Canon Law at the Pontifical Uni­versity of the Holy Cross is widely recognized as a unique program. While other canon law programs in Rome tend to focus more on the exegetical approach to studying existing code, Santa Croce follows natural law as proposed by Saint Thomas Aquinas. Student Fr. Albert Llaveria of Spain explains the difference: “We follow a systematic model to study the law. Instead of studying the canons one by one, we try to know them as part of a whole.”

Third-year student Father Stanislav Oleshko of Ukraine is also enthusiastic about Santa Croce’s unique­ness: “Canon law at Santa Croce follows one ‘school,’ so all the professors are consistent in teaching in this way. It doesn’t mean that there are no different opinions or discussions between them – that wouldn’t be a good academic example – but it helps to have one coherent general view of canon law, which gives a hermeneutic key for interpretation in different cultural contexts.”

This approach is rooted in a historic understand­ing of theology and the magisterium, connected to reality. Therefore, Catho­lic jurists are offered a profound way of looking at law and the world.

Fruitful Participation in the Mass 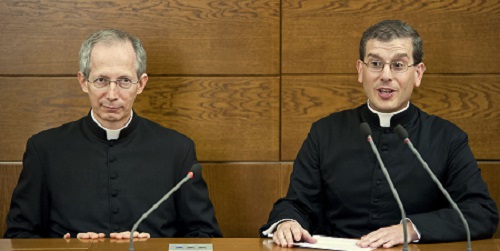 A series of nine weekly lectures, from October 17 through December 12, was sponsored by Santa Croce’s Center for Priestly Formation. The course is geared toward priests and designed to deepen aspects of fruitful participation in the Eucharistic cele­bration. The lectures seek to link three realities: the liturgy and its cel­ebration, beauty, and life. As Pope Francis has written, “The Church evangelizes with the beauty of the lit­urgy…” (eg Evangel Gaudium, 24)

One of the course objectives is to remain faithful to the liturgical re­newal desired by the Second Vatican Council while being in continuity with ecclesial tradition. Attention is also given to all forms of “language” in the liturgy: word and song, body movements, gestures and silences.

Why a School of Church Communications? 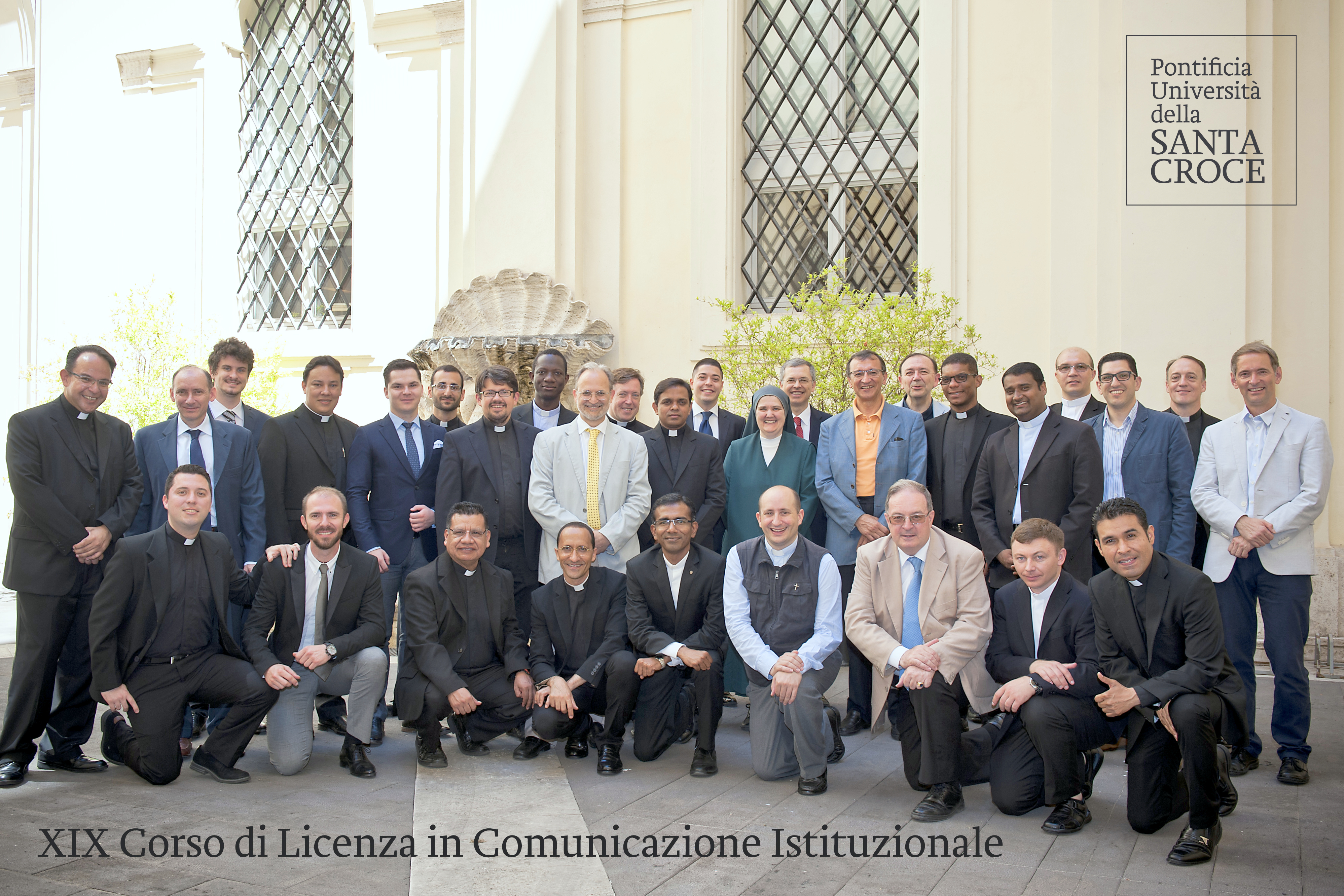 Santa Croce was launched in 1984, but did not attain the status of being a Pontifical University until it added the School of Church Communications in 1996. One of the requirements of being a Pontifical university is to offer four degree programs. The first three schools were Philosophy, Theology, and Canon Law. Why was Church Communications chosen as the fourth school?

One reason can be traced to the influence of the Opus Dei founder, St. Josemaría Escrivá. Nearly 60 years ago, as the first Chancellor of the University of Navarra in Spain, he asked for a journalism program to be created. 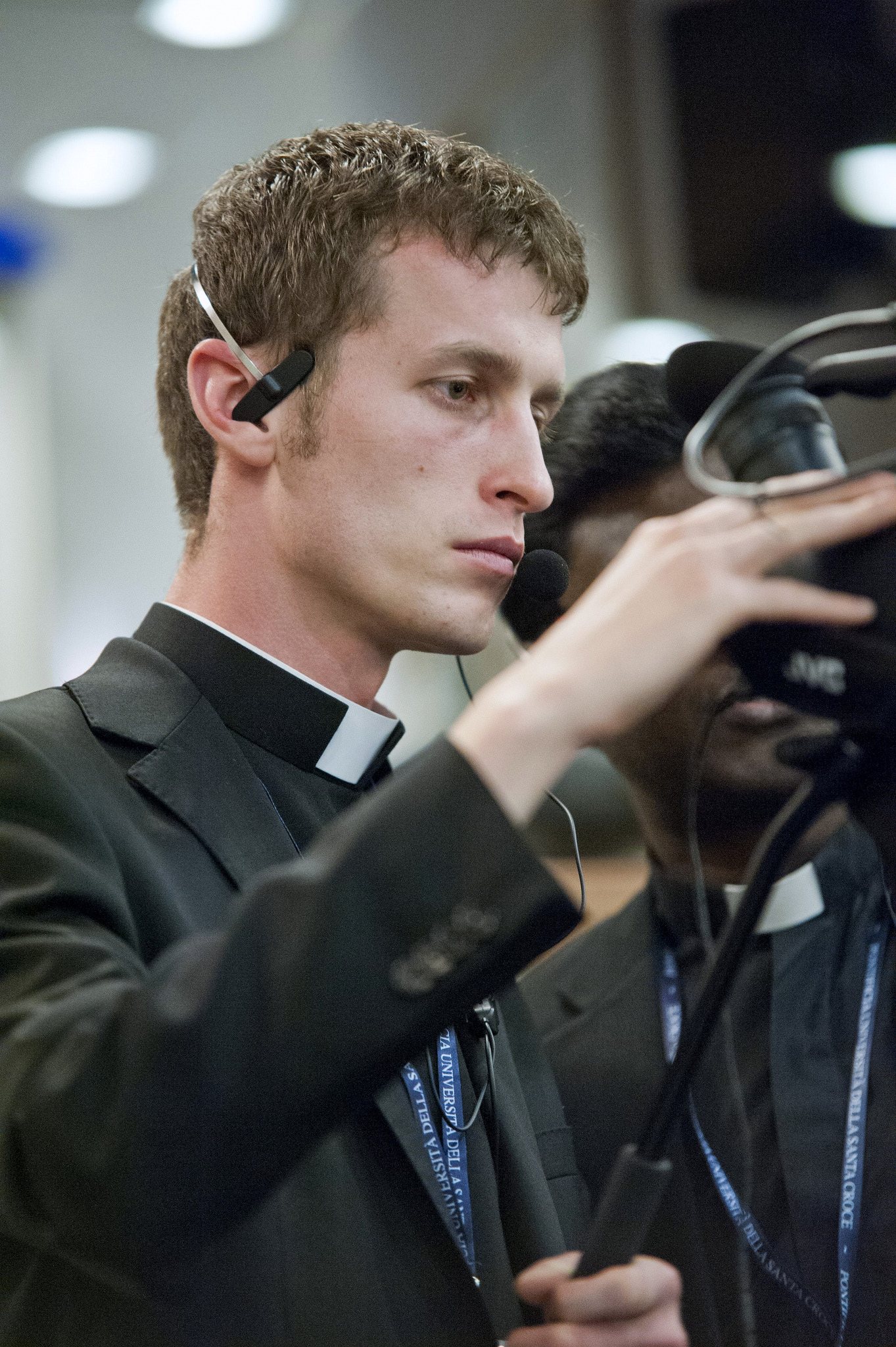 The university website states that the program reflected the saint’s founding charism: “a tradition in the humanities combined with technological innovation; teaching based on both research and on contact with reality; raising the profile of media related professions through theoretical and practical research; ongoing relations with the professional and academic world alike, and close contact between students and alumni.”

A second reason was the influence of St. John Paul II, who emerged as the first “media” pope in a time when communications technology (television and computers) were rapidly expanding. Also, according to Fr. José María La Porte, Dean of the School of Church Communications, the Pope’s long-time Director of the Holy See Press Office (1984-1996), Joaquín Navarro-Valls, “encouraged the Church Communications School from the beginning.”

A Rational Search for Truth

The School of Philosophy's Unified Approach 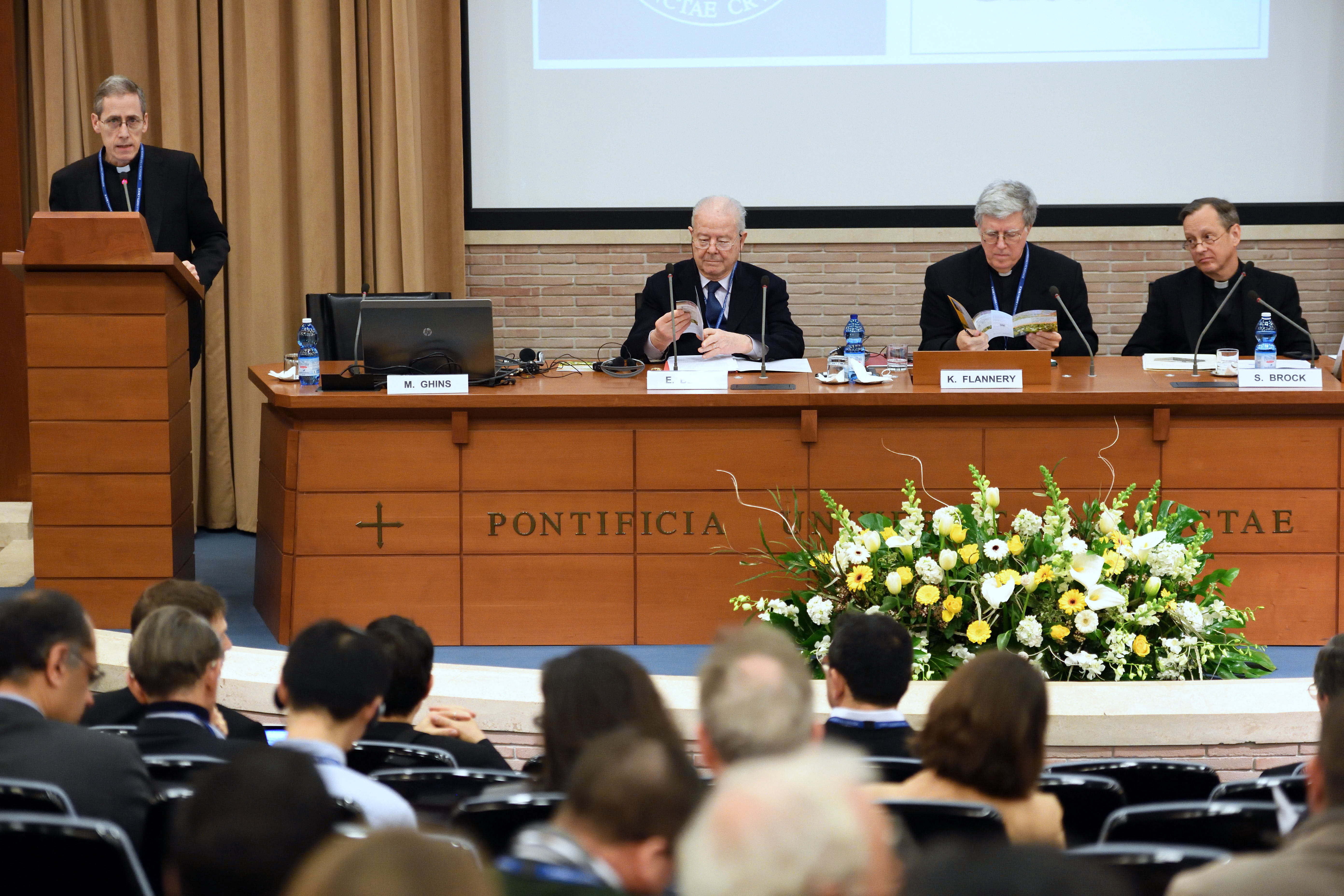 “Faith and reason are like two wings on which the human spirit rises to the contemplation of truth; and God has placed in the human heart a desire to know the truth—in a word, to know himself—so that, by knowing and loving God, men and women may also come to the fullness of truth about themselves.” St. John Paul II

These opening words from St. John Paul II’s encyclical on the relation between faith and reason are a succinct and beautiful expression of the principle at the core of Santa Croce’s School of Philosophy. In the history of Christian philosophy there are a few other famous expressions of this basic idea. St. Augustine wrote, “I believe in order that I may understand.” Another phrase from St. Anselm of Canterbury is his motto, “faith seeks understanding.” 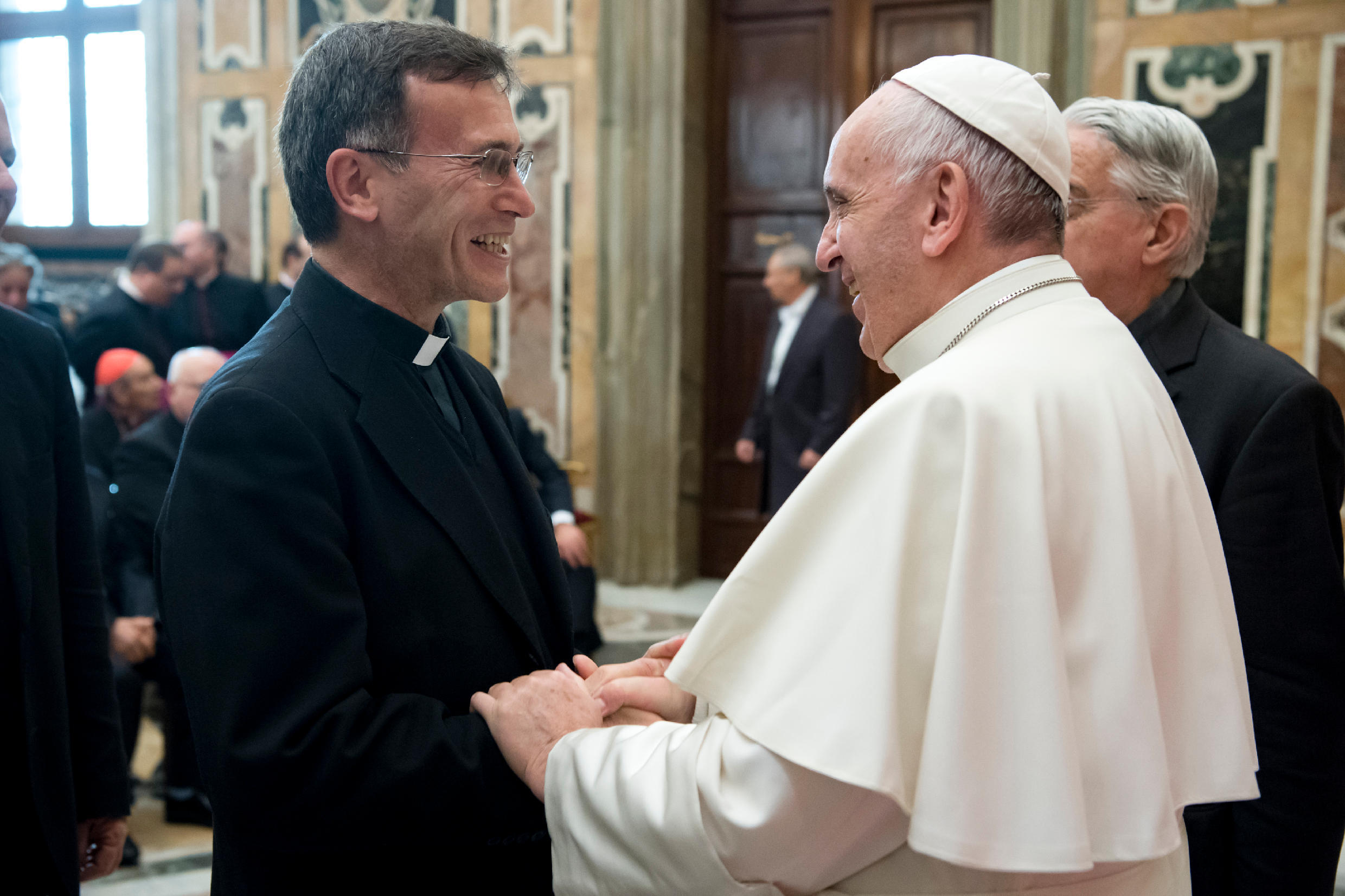 Pope Francis greets Fr. Phillip Goyret, Dean of the School of Theology, at the Celementine Hall of the Apostolic Palace in the Vatican, where the Holy Father presented the Ratzinger Prize to two scholars who distinguished themselves through their work in theology.

Since its inception in 2010, the Joseph  Ratzinger - Benedict XVI Foundation has recognized scholars whose work demonstrates a meaningful contribution to theology in the spirit  of Cardinal Joseph Ratzinger (Benedict XVI).

The Pontifical University of the Holy Cross in partnership with the Foundation, sponsored a symposium on November 24-25, 2016, titled: “Eschatology: Analysis and Perspective” which was held at the university.

A New Leader for Opus Dei and Santa Croce 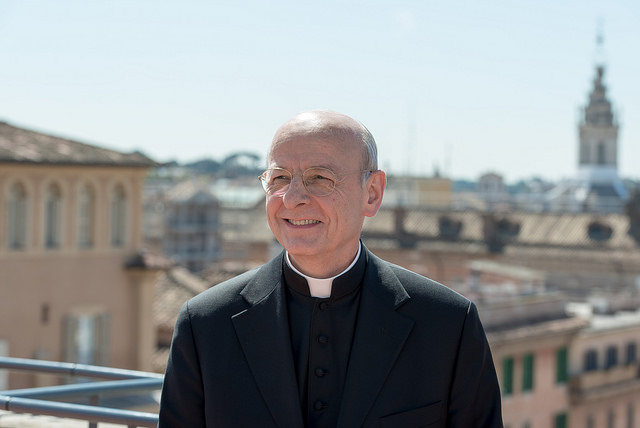 [January 24, 2017 - From the internet edition of the Catholic Herald Newspaper]

Mgr Fernando Ocáriz Braña has been elected the new prelate of Opus Dei, with Pope Francis approving the election on Monday.

Mgr Ocáriz takes on the leadership of Opus Dei, a personal prelature that aims to  help ordinary people seek holiness in everyday life, following the death of the previous prelate, Mgr Javier Echevarría on December 12.

Since 1994 he has been the Vicar General of Opus Dei and in 2014 he was named Auxiliary Vicar of the Prelature. Over the past 22 years he accompanied Mgr Echevarría in his pastoral trips to more than 70 countries. In the 1960s, as a theology student, he lived in Rome alongside St Josemaría, the founder of Opus Dei.