A New Bishop, with the Heart of a Parish Priest 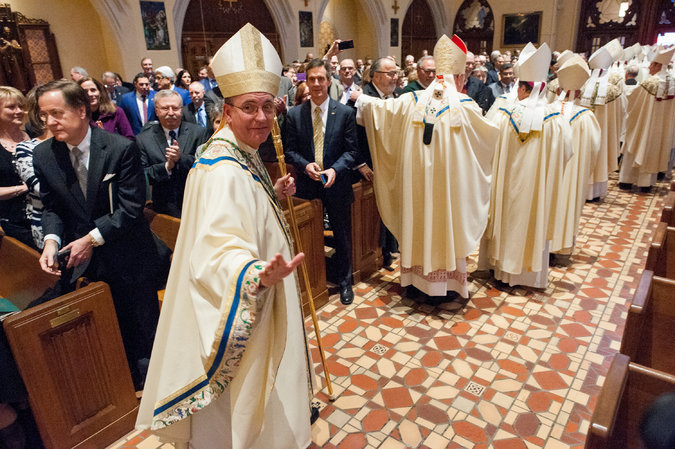 ROCKVILLE CENTRE, N.Y. [This article by Sharon Otterman appeared in The New York Times on January 31, 2017. Bishop Barres is a graduate of The Pontifical University of the Holy Cross)

Bishop John O. Barres, installed as the head of the Diocese of Rockville Centre on Tuesday, pledged to bring a pastoral approach and a focus on personal spirituality to Long Island’s 1.5 million Roman Catholics.

In a ceremony rich with symbolism that dates back centuries, Christophe Pierre, the apostolic nuncio to the United States, read aloud the official letter from Pope Francis appointing Bishop Barres. Bishop Barres then walked with it down the aisle of St. Agnes Cathedral here, holding it aloft so all could see.

Archbishop Pierre and Cardinal Timothy M. Dolan, the archbishop of New York, then led Bishop Barres to his chair and presented him with the crosier that symbolized his role as the diocese’s new shepherd. The people in the church stood to applaud.

Bishop Barres then personally greeted more than a dozen representatives of the diocese and other faiths, taking his time in a way that underscored his desire to act as bishop like a loving parish priest.

Bishop Barres with Brenda Bean at a reception after his farewell Mass on Jan. 22 in his former diocese in Allentown, Pa. CreditMark Makela for The New York Times

Bishop Barres replaces Bishop William Murphy, 76, who had led the diocese of 133 parishes across Nassau and Suffolk counties, the eighth largest in the United States inclusive of archdioceses, since September 2001. Bishop Murphy submitted his resignation to Pope Francis when he turned 75, as required by the Vatican, and has said he intended to remain in the diocese in his retirement.

Bishop Murphy, a gregarious and outspoken man, is a doctrinal conservative who was not shy about wading into culture wars and politics. Before the 2016 presidential election, for example, he wrote a letter to be read aloud in all Sunday Masses that said support for abortion “should disqualify any and every such candidate from receiving our vote.”

Bishop Barres, 56, embodies a different style. Naturally shy, he was described by his former flock in the Diocese of Allentown in Pennsylvania, where he had been bishop since 2009, as low-key, warm and personable.

At the same time, he leans traditional in his Roman Catholic outlook. He is focused, he said in an interview, on what he calls the eternal truths of the church and has a deep personal practice of prayer. To that end, he meets weekly with an adviser from the Roman Catholic spiritual organization Opus Dei, an association that encourages its adherents to bring the worship of God into all aspects of life in an effort to sanctify it.

“I see myself as a pastor of souls, someone who is going to listen to people at a deep contemplative level to their life experience,” Bishop Barres said in an interview. “And at the same time, to be a bridge to what we believe is the splendor of truth, which is ultimately liberating to all of humanity.”

At his simple farewell Mass attended by several hundred people on Jan. 22 at the Cathedral Church of St. Catharine of Siena in Allentown, the parishioners described Bishop Barres as generous with his time, great at remembering their names and intent on guiding them toward a deeper level of religious understanding.

“He will never exclude anyone, but he will continue to proclaim the truth from the Scriptures,” said Rob Eidle of Wyomissing, Pa., who was there with 10 of his children. He said the bishop had thanked him for the blessing to the church of his large family, and told him good things will come of it.

On a long receiving line after the Mass, John Ernst, 47, thanked the bishop for coming to his home to pray and giving his son, Simon, 13, a rosary when he learned he had leukemia five years ago. Simon subsequently received a bone-marrow transplant and recovered.

“Bishop Barres, you told us that if we have something precious, we should give it away to someone else,” Mr. Ernst said, becoming emotional. “Well, now it’s coming full circle. You are precious to us, and now we are giving you away.”

Angela Stanek recalled how Bishop Barres spent hours with her father when he was in the hospital. Kerry Kinek, a college basketball player, recalled how he showed up unexpectedly to watch her get her 1,000th basket in high school. His personal cook at his residence, Valerie Moyer, said he spent hours in prayer each day, even setting up a small work station in the chapel.

She said he was hard-working, humble and not a picky eater. “His most requested dish is ‘whatever you decide’ or tuna fish sandwich,” she said.

Bishop Barres is a native of Larchmont, N.Y., and was the fifth child of two Congregationalist ministers, Oliver and Marjorie Barres, who met at Yale Divinity School and converted to Catholicism before he was born.

Though he first considered the priesthood while at Phillips Academy, an elite prep school in Andover, Mass., he took an unconventional route getting there. He has a bachelor’s degree in English literature from Princeton University and an M.B.A. from New York University. In Rome, he studied at the Pontifical University of the Holy Cross, which is run by Opus Dei, and became a member of the Priestly Society of the Holy Cross, its organization for diocesan priests, in 1991.

The priority he places on serving his parishioners places him in the pastoral mold of Pope Francis, even if he is not the same kind of progressive. For example, in Allentown, he did not generally have female altar servers at his Masses at the cathedral. But in the parishes he would celebrate alongside them, said his diocesan spokesman, Matt Kerr.

“What this appointment shows is that Pope Francis is continuing a pattern of a diversity of appointments among his bishops,” said James McCartin, the director of Fordham University’s Center on Religion and Culture. “There doesn’t seem to be a litmus test.”

In Allentown, Bishop Barres, who speaks Spanish, focused on ministering to Hispanics and to young people, whom he values as the future of the church. To inspire and relate to young people, he often talks about his time playing basketball as a point guard, first in high school and then at Princeton on the junior varsity team.

“I really believe all those hours I spent during ball-handling drills, it was the Holy Spirit preparing me to be a point guard for the Holy Spirit and for all of you,” he said he tells them. He likes to give out a small basketball card he had made up that shows him in traditional bishop’s robes on the front and making a layup as a basketball player at Princeton on the back.

“What’s on your card?” he said he asks the students. “It may not be basketball. It may be debate or model U.N. or your desire to develop acting skills. But the Holy Spirit is using that to form your destiny.”

ATTRIBUTION*** A version of this article appears in print on February 1, 2017 edition of The New York Times, on Page A21 with the headline: "A New Bishop, With the Style of a Parish Priest, for Long Island."