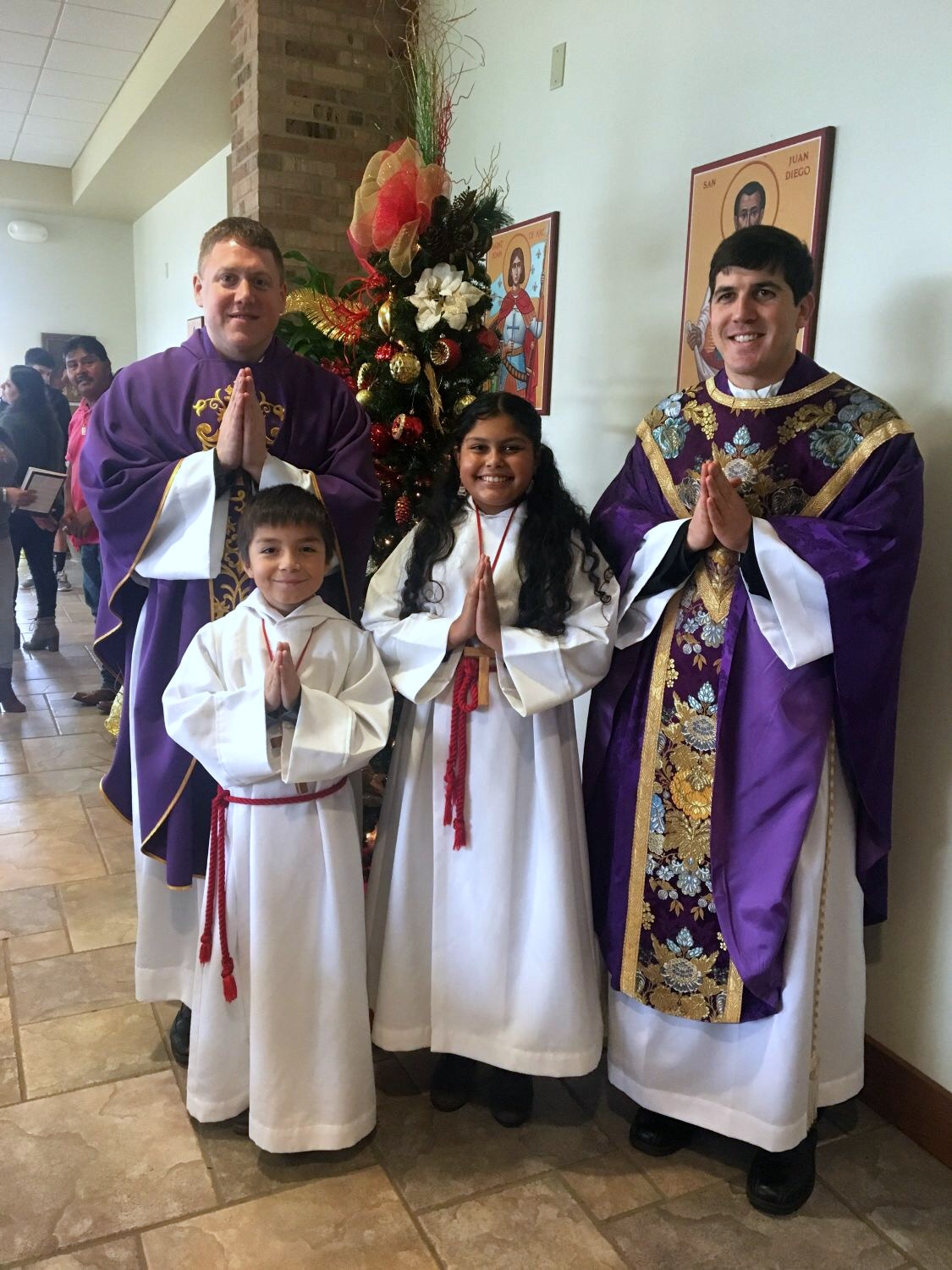 Fr. Peter with Fr. Taylor Reynolds (on right) a diocesan priest who will graduate from Santa Croce with JCL in Canon Law in 2019

When he was a 15 year-old high school sophomore, Peter Faulk traveled from Louisiana to Denver, Colorado to attend the 1993 World Youth Day. The impact of hearing St. Pope John Paul II inspired Peter to foster a personal relationship with Christ that ultimately led to discerning his vocation as a priest.

After a period of secular university studies, Peter’s bishop sent him to St. Joseph Seminary in Covington, Louisiana (for philosophy). He then attended Pontifical College Josephinum in Columbus, Ohio (for theology) and was ordained in 2006. His first assignment was as an associate pastor in two parishes along with being assigned to work in the area of youth evangelization.

Due to the increasing numbers of Catholic Latino immigrants coming to Louisiana as agricultural workers, the bishop needed more priests who could speak Spanish. Fr. Peter was sent to a seminary in Mexico for an extended period of full-immersion to learn the Spanish language.

Upon returning to the Diocese of Alexandria, Fr. Peter worked for several years to help serve the Latino community of approximately 2,000 families. In addition to his work with immigrants, he assisted as an assessor in the Diocesan Tribunal to review marriage annulment cases as well as other Church law matters. Fr. Peter’s facility with languages and canon law led the Judicial Vicar of the Tribunal to consider the possibility of having him travel to Rome, learn Italian, and study for a degree in canon law.

When seeking advice as to where to study canon law, the overwhelming recommendation was The Pontifical University of the Holy Cross. After completing his three-year program in Rome, Fr. Peter returned to his diocese to replace the retiring Judicial Vicar on the Tribunal. However, the needs of the Latino immigrants continued to be an important part of his priestly ministry.

In addition to celebrating weekend Masses in Spanish for one of the largest Hispanic communities, Fr. Peter is involved in lay formation for Latinos. His Latin American friends and fellow students from Santa Croce played a role in making Hispanic lay formation very effective. Gathering in a diocesan conference room, Fr. Peter hosts interactive study programs using Skype technology to connect with native Spanish speakers who have theology, biblical, as well as other ecclesiastical degrees.

Fr. Peter has found that the Latino population “love it” and that this would probably never have happened without the influence of his time in Rome. He says, “Many of these ideas and initiatives were born out of the principles of the Second Vatican Council, the Law of the Church and its role in the New Evangelization which were integral components of the formation at Santa Croce. The goal at Santa Croce is for students to take what they learn and apply it their home country. I can’t recommend the university highly enough.”

From Louisiana, to Denver, to Mexico, to Rome, and back again – the Lord has guided this alumnus of Santa Croce in ways he could never have imagined. Today, Fr. Peter is one of many alumni who are serving the needs of their diocese with innovation and evangelistic zeal. This story of “Our American Impact” is representative of countless examples in Catholic dioceses around the world. Thanks to your support, our graduates continue to bring the Gospel to new generations. 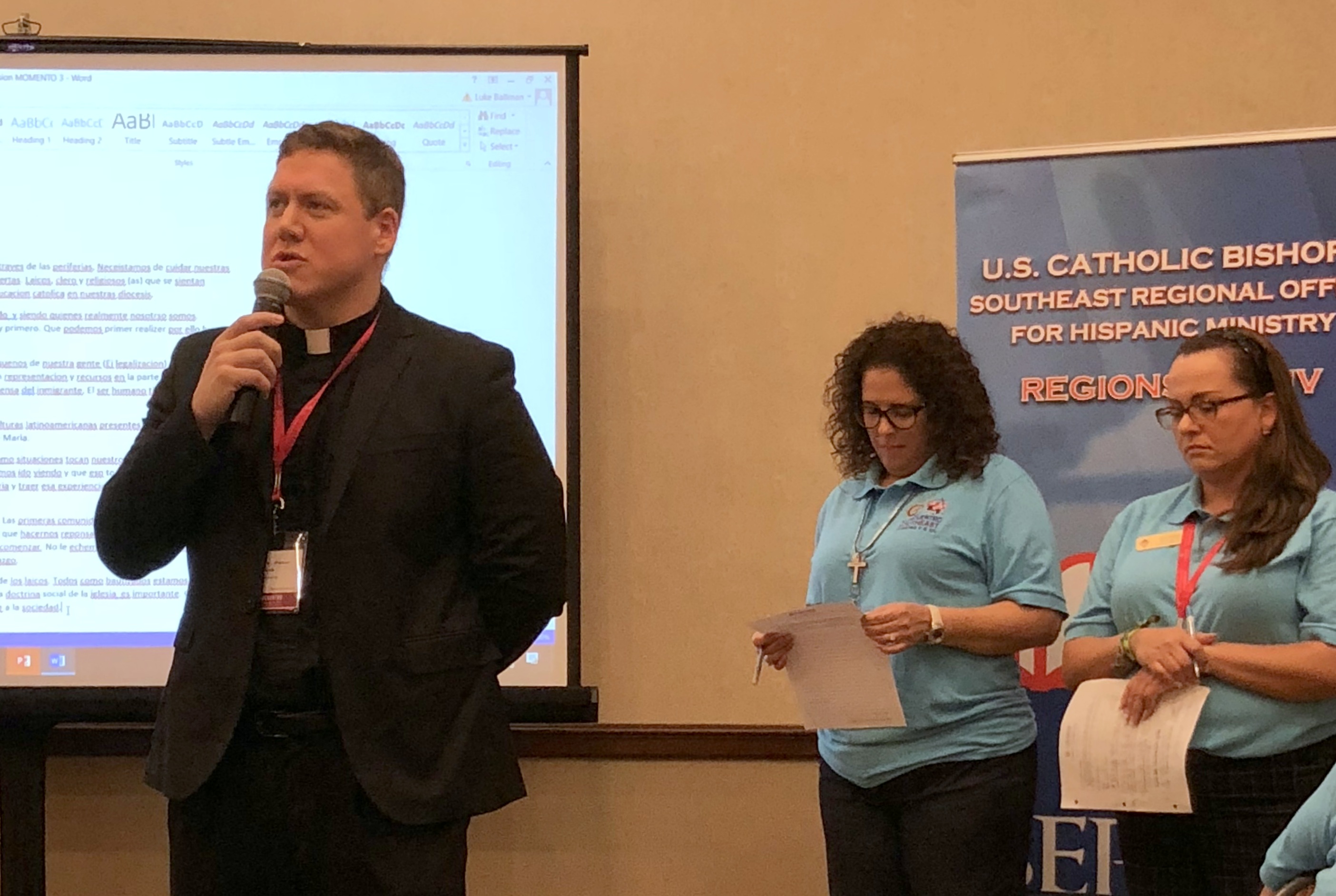