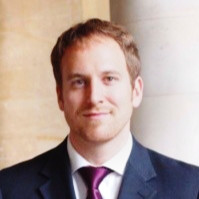 Colin has had strong ties to the Holy Cross University in Rome since his conversion to Catholicism in 2010 and has been active in development for the University and the Church since 2012. Since then he has collaborated and consulted in twelve different countries and most recently spent the past three years in Germany building up the organization Priesterausbildungshilfe to offer top-tier formation for priests from all corners of the globe.

In May 2019 he began his tenure as Executive Director of the Holy Cross Foundation in the United States.

Colin’s wife and better half, Catherine, is a doctor of Canon Law and adjunct professor of Notre Dame University. They currently live with their three children, Catherine, Felix and Sebastian in South Bend, Indiana.