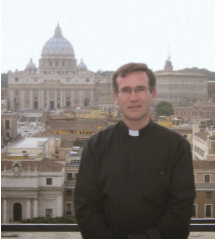 HOW DID THE IDEA OF STARTING A CENTER FOR PRIESTLY FORMATION (CPF) COME ABOUT?

Many bishops, who have sent their priests to Santa Croce for degrees, told us that they were very happy with the work that we do, and that their priests were returning to their dioceses well prepared to be good teachers. But they also said that they would like for us to prepare them to become formators of seminarians, to become spiritual di­rectors, vice-rectors, rectors, dean of studies, etc. The Center’s Director, myself, and two other professors took the Bishops’ request and started this center. After presenting the idea to the governing board of the university, it was approved.

WHAT IS THE MAIN GOAL OF THE CENTER FOR PRIESTLY FORMATION?

The goal of CPF is to form priests to be formators. Here in Rome we have many activities for student priests. For example, we have a Master’s De­gree in formation for future formators of seminaries, which takes place once a week in the afternoon. So priests who are doing a degree in Theology or Philosophy can also receive this formation in addition to their main study program. They go back to their countries with their academic degrees and also with this formation. This is our main goal.

DO YOU HAVE OTHER WORKSHOPS AND SEMINARS?

We have held other workshops for priests in Rome who are already in charge of seminaries. There have been seminars on confession, preaching, and we are thinking of starting semi­nars on administration and manage­ment of seminaries and churches. The workshops are designed to be small in number, for around 50 or so priests, to be able to really dialogue and dig deep­ly into the subject in a practical way that’s meaningful to the participants.

ARE THERE ANY PROGRAMS OFFERED OUTSIDE ITALY?

Last summer we organized week-long workshops in Mexico, focusing on confession and spiritual direction in view of the Extraordinary Jubilee Year of Mercy. We had one week in Monterrey followed by a week in Ci­udad Juarez, and the last week took place in Guadalajara. These work­shops were a great success. In Guada­lajara we had 650 participating parish priests! This is beautiful, because it shows that priests really want to grow in their formation as confessors.

Next summer we will travel to other cities of Mexico and parts of South America, it varies based on what people ask for. We also have projects planned for Brazil, the Phil­ippines, India and the United States.

HOW DOES THE PREPARATION OF PRIESTS TODAY DIFFER FROM THE PAST?

Evangelization today is an evangeli­zation in a world that has been Chris­tian, but is not Christian anymore, and that is difficult. So we have to prepare priests for the new evangeli­zation in a new context, not only of globalization, but a post-Christian modernity. That is why we need a different kind of preparation because things are not as they were before.

WHAT ARE SOME FUTURE GOALS?

We would like to build a website with documents, booklets and in­formation about all the conferences that we do. For example, talks on the priestly life of prayer, spiritual direc­tion, and spiritual reading. We want to have all of this material online and free for anybody who would like to read it.

WHAT DO YOU STILL NEED?

Our work is going very well, but we need help. Most importantly we need your prayers to help our initia­tives. Also, we need students and donations to allow for sponsorships. I thank God that there are many people who have helped us, both those who send large contributions, and also those who give even twen­ty-five dollars every month.