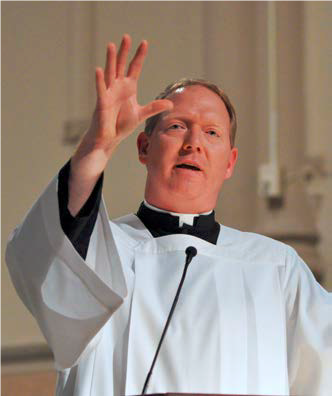 People may casually address Fr. Patrick Beidelman as “Fr. Pat”, but his official title is “The Very Rever­end Patrick Beidelman”. The “Very” is used for priests who are seminary rectors or rectors of cathedrals. Fr. Pat has worked in both settings, and cur­rently he is the rector of Sts. Peter and Paul Cathedral in Indianapolis and the Executive Director of the Secre­tariat for Worship and Evangelization for the archdiocese.

After his ordination in 1998, his early assignments included being an associate pastor, part-time high school chaplain, and later a pastor. Fr. Pat completed a Liturgical Theology degree from Santa Croce in 2009 in Liturgical Theology. He and his bish­op chose Santa Croce because of their pastoral approach. Other excellent liturgical studies programs in Rome were heavily academic, requiring 4 or 5 years to complete, and the study of original sources in their original languages. The Santa Croce degree required two years of study and was ideal for pastoral work.

When he returned to Indianap­olis, Fr. Pat was appointed vice-rector of the archdiocesan college seminary in charge of their formation program, focusing on the pastoral, human, and spiritual dimensions of priestly for­mation. He helped seminarians to set goals and evaluate necessary steps to­ward priesthood. He regularly coun­seled aspiring priests on the impor­tance of establishing a commitment to spiritual growth.

Of his own experience in Rome, Fr. Pat said, “Among the things I learned at Santa Croce was the church’s liturgical tradition and how to utilize the richness of that tradition in everyday parish life. I also took away the commitment to growing in holiness that I witnessed among the faculty and community at large which is with me now and for the rest of my life.”

“[At Santa Croce] I also took away the commitment to growing in holiness that I witnessed among the faculty and community at large which is with me now and for the rest of my life.”

A commitment to spiritual growth is integral to Fr. Pat’s approach to promoting solid worship and evan­gelization practices. It is also central to his association with two aposto­lates. First as Deputy Chaplain of the Order of Malta for Central and South Indiana, an order that has served the poor and sick since the 11th century. Second as the archdiocesan liaison for Cursillo, a renewal movement best known for teach­ing laypeople how to become effective Christian leaders over the course of a three-day weekend.

Fr. Pat comes from a family of six. He gives tribute to his large extend­ed family for pass­ing down the faith which brought sev­en priests and two religious sisters to serve the Church. He also cites the importance of In­dianapolis’ Cathedral High School where he graduated as did his father, uncles, and three brothers.

Congratulations to Fr. Pat on his 20th anniversary as a priest. He has determined to use all the blessings derived from his family, his schools, and his Church to bring the richness of Catholic liturgy, worship, and faith to others. He has dedicated himself to the pursuit of growing in holiness.