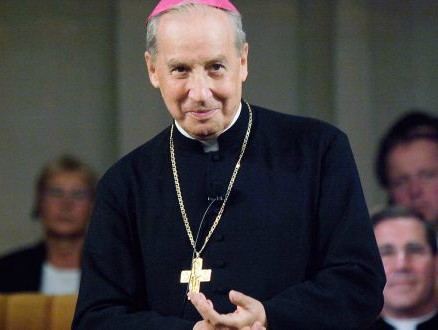 With hearts full of sadness, but also full of hope, we announce the death of Msgr. Javier Echevarría, the Grand Chancellor of Santa Croce and Prelate of Opus Dei, who passed away on the night of December 12th at the age of 84.

Bishop Echevarría had been admitted to a hospital in Rome a week prior due to a lung infection, and passed away on the Feast of Our Lady of Guadalupe at 9:20 pm. Struck by the loss of this dear spiritual father, formator, and leader of the university, we are also filled with peace and joy knowing that this devoted servant of the Lord has returned to his true home, and we are grateful for the blessing of his life. Our Grand Chancellor left behind a true example of holiness for us to follow, and many happy memories for us of a spiritual father who brought humor and joy to the halls of Santa Croce.

Msgr. Echevarría was born in Madrid, Spain, in the year 1932. He was a close collaborator of St. Josemaría Escriva, and served as his own secretary for 22 years, after which he was appointed Secretary General and Vicar General of Opus Dei. In 1994 he was elected as Prelate of Opus Dei, becoming the second successor of the Saint, following Blessed Alvaro del Portillo. Msgr. Echevarría received his Episcopal ordination on January 6, 1995, from St. John Paul II in St. Peter's Basilica.

As Grand Chancellor of the University of the Holy Cross, Msgr. Echevarría is remembered as a good and humble leader, who had an exceptional memory with regards to people, and never missed an opportunity to make those around him laugh. "In all of my encounters with him I could see three prevalent characteristics", said Professor Daniel Arasa, "the first was his fidelity to the spirit of St. Josemaría Escriva as he was constantly referring to him and the spirituality of his life. The second characteristic was his love for the Church: he was always encouraging us to be ever more faithful in our apostolate, and to put the spirit of Opus Dei at the service of the Church. The third was his love for the Pope, and at the end of every single meeting he would remind us to pray for the Holy Father. He had exceptional human qualities, one of which was his great sense of humor; he was always cracking jokes with us! I remember him as always giving each individual his full attention and remembering many details, which showed his sense of paternity for us. Often he would call to say thank you or to ask for prayers. He truly cared for everyone at Santa Croce, not only the professors but also the students and staff, and was always offering encouraging words to those he encountered at the school."

In sharing her experience of Echevarría, philosophy student Pia Patricia Garcia described knowing him as "a great, great gift. I will remember many things, like the way his eyes twinkled, and the way he paid attention to you as if what you had to say meant everything to him; his way of teasing people, and just as quickly saying something that made you realize that his life was immersed in faith and prayer. He saw the world in all its practicality and lovable humanity, but valued it in the love of Christ. What he taught me above all, through word and example, is that the most important thing is to have your heart and mind completely set on the will of God, and that an essential part of that is to love the people He has put beside you."
Do you like this post?
Tweet