One Priest with Many Responsibilities 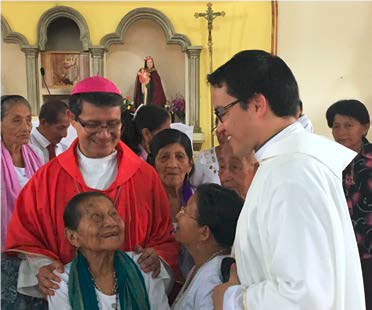 One’s local experience of the Faith is united to the Church in all corners of the world. These diverse Faith experiences intersect in Rome, making the richness of the Church body visible. Fr. Jorge Avíles Wong comes to Santa Croce from Guayaquil Ecuador, where over three million Catholics need ministry.

Fr. Jorge specializes in bioethics, for which he has many responsibilities beyond pastoral work. There are approximately 30 medical centers and three hospitals owned by the diocese of Guayaquil, as well as healthcare laws contrary to Catholic teaching that require Church action. 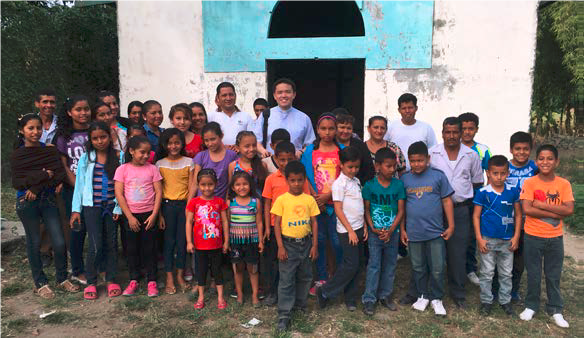 First Communicants at the Chapel of the Immaculate Conception

Fr. Avíles received a master’s degree in bioethics from University of Navarra, in Spain, alongside his seminary studies. Now in Rome, Avíles’ bishop wants him to add moral theology to his bioethical knowledge.

“Bioethics is a field that is always developing with science,” Avíles said. “Seven years ago, we were talking a lot about abortion. Now we are talking about euthanasia, surrogacy, and stem cell research.”

The   moral repercussions of healthcare decisions make bioethics a necessary field for priests to be informed, but it is a difficult field on which to stay up to date. “Each priest teaches so many people, maybe thousands, and they must be clear [on bioethical issues],” Avíles said.

Avíles teaches in bioethics and moral theology in the diocesan seminary, while forming catechists and helping the bishop develop healthcare centers are principal also responsibilities.

“The bishop wanted to start a center for drug rehabilitation and was not sure which treatment methodology we should implement, so I have been researching various centers to find an effective method.”

One obstacle for priests serving the medical needs of Guayaquil is legislation that disregards the Catholic faith. At the moment, a law is in the process of being passed to enable secular practices including surrogacy, in all hospitals nationwide. Avíles works with pro-life groups in the country to change laws that threaten the wellbeing of society.

While these challenges are daunting, Avíles has succeeded to implement changes in the past that give him hope for further progress.  One such success was overcoming a federal law that prohibited priests from visiting public hospitals. After meeting with hospital directors, Avíles was able to instill chaplaincy in four of Guayaquil’s largest hospitals.  “It was difficult, but we did it!” he said.

In addition to tasks relating to bioethics, Fr. Avíles carries many pastoral responsibilities like most priests. Uncommon however, is the effort to which Avíles must go to reach all the faithful he serves.

A typical day for Avíles may entail a morning meeting in the city, such as with a hospital director or politician, and returning to the countryside for pastoral work the rest of the day. Traveling from the city to the countryside is not easy. Avíles and one other priest minister to 2,400 Catholics spread throughout 45 rural communities. The poor condition of the unpaved roads requires a pick-up truck to traverse. Even crossing rivers by canoe is necessary for Avíles’ work.

“Most communities have a chapel,” Avíles explained, “but in others we have to celebrate Mass in a school. It is beautiful work because the people there are very poor, but very humble and open to the faith.”

Taking time away from his demanding work in Guayaquil to come to Rome for studies allows him to reflect on his ministry and tasks there from a wider vantage point.  Santa Croce equips Avíles with knowledge and skills that he will take back to the faithful. After one more year of study, Avíles will return to Ecuador to carry on the ministry he has begun.